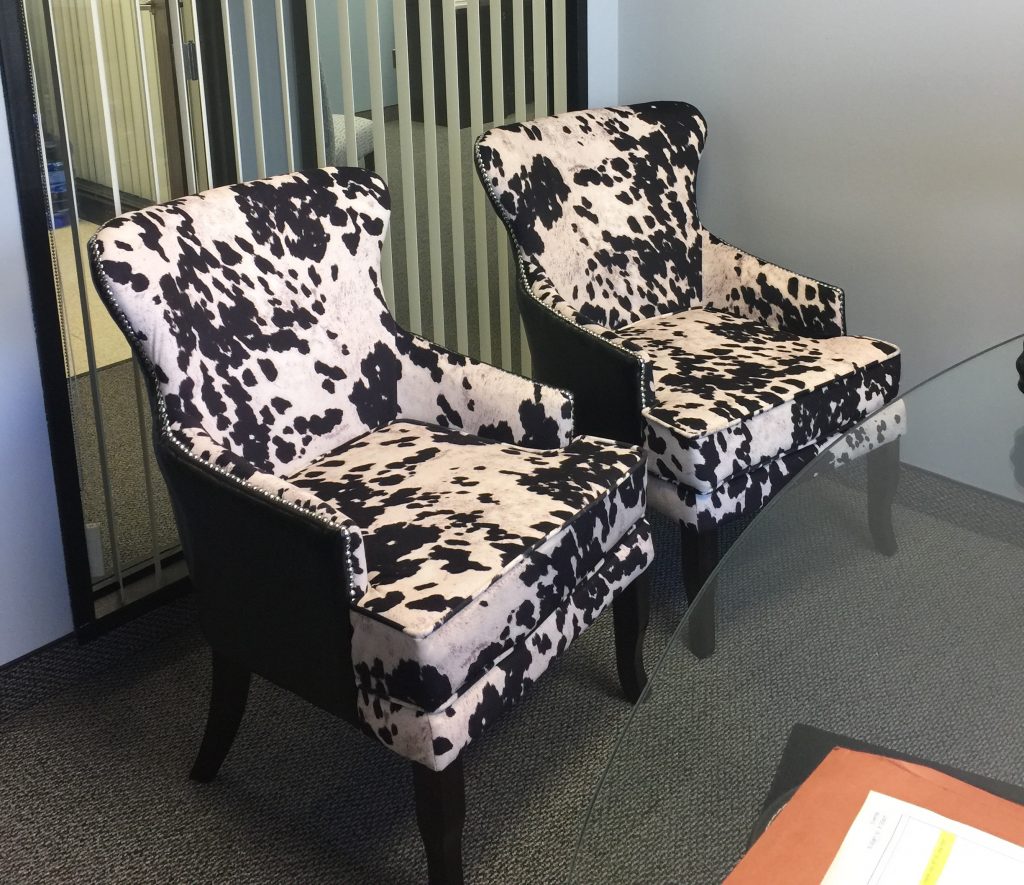 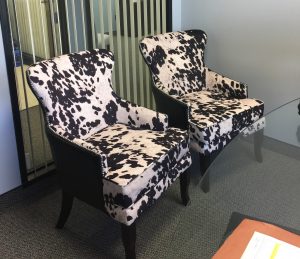 Last week we had an open house for our Southfield Office. Please stop by sometime.  We’re at 26211 Central Park Blvd., Suite 200.

And while you’re there, you might notice that Amy Tripp’s office has some unusual decorations, including the cowhide chairs pictured above, as well as a poster of the John Wayne movie Red River.  If you have nothing better to do with the next ten minutes, here’s the story on that:

For those of you who don’t know, in Red River, Tom Dunson (played by John Wayne) sets out to start a cattle ranch in Texas. He heads west with a wagon train, but when he senses that the time is right, he leaves the wagon train and goes out on his own (with one old farmhand and one bull).  He soon runs across a child who has one cow with him (Matthew Garth).  Dunson takes on Garth and his cow.

Fast forward twenty years and the herd is huge, but they are a thousand miles away from any market (railroad station) at which the cattle could be sold. Hence, a cattle drive that no one has ever attempted, across territories fraught with danger.

They start out toward Sedalia (Missouri) where they know they can sell the cattle, but along the way they hear of a train into Abilene (Kansas), which, if true, would mean that they could significantly reduce the drive and avoid many of the most dangerous territories. The question is whether they continue on to Sedalia or redirect the herd to Abilene.

The two strong-willed cattlemen, old Dunson and young Garth, disagree on the direction of the herd. Dunson says they continue to Sedalia.  Garth is persuaded that they should take a chance on Abilene.  Until now, Garth has deferred to Dunson to make all the decisions, but he holds his ground, and, supported by the other cattle hands, drives off Dunson and takes command of the herd.  They continue to Abilene where there is a train, and the herd is sold – but Dunson returns with a posse and engages in a brutal fight with Garth.  Before one of them gets killed, Dunson realizes the error of his ways, acknowledges his love for Garth and the wise decision Garth made in redirecting the herd. Everyone makes up – and it’s all good.

For Amy and me, the movie captures much of what we have gone through in building this firm – the brutal disagreements, the difficult challenges we’ve faced, but also the unwavering trust we have had in each other that has always pulled us through. When things have been especially rough, we have re-watched our favorite movie, to remind ourselves that, in the end, our relationship and all that we’ve worked so hard to accomplish are more important than any disagreements – which at that moment seemed so crucial.

Unlike the prior offices we’ve opened, in which I have been intimately involved, opening the Southfield office was primarily Amy (and Chris Smith). I was happy to remain outside the metro Detroit area – Amy realized the time had come to go there. So, now we have an office in Southfield – or as Amy and I like to say: an office in Abilene