Tall Tales and Back Woods Justice 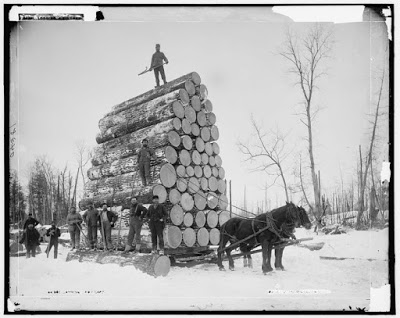 This new unpublished decision from the Court of Appeals comes out of Ogemaw County.

Ogemaw is a small out-of-the-way county, with a lot of rivers and trees. Right off the exit of I-75 at West Branch, the county seat, sits a hotel-restaurant-conference center-gas station (all in one building) that features some spectacular relics and photographs from Michigan’s logging era. And, as we Michiganders know, logging goes hand in hand with tall tales and outrageous stories. So, it is with this case.

Geraldine had her will and trust done by different lawyers at different times. The last valid amendment to her trust appointed certain friends as Trustees, because, as she told her attorney, she didn’t trust her kids.

After she died, one of those kids produced a new will, and produced the signature page to the trust amendment that the lawyer had prepared but with other pages that were not part of the document that the lawyer drafted. Unsurprisingly, these new pages appointed the bad kid as Trustee and distributed the estate more favorably to her. When it was pointed out that the pages to the trust amendment had clearly been swapped out, bad child feigned surprise and looked around a little more only to find and produce a new signature page to go along with what she now claimed must have been a second amendment, a second amendment executed later the same day as the first amendment. So, bad child’s story became that Geraldine got home from the lawyer and changed her mind about family member trustees and about how her estate would be distributed, and drafted her own second amendment.

That’s her story and she sticks to it all the way through trial.

At trial, bad child produced witnesses to these documents (all of whom happened to be her friends and family, and each of whom financially benefited one way or another), but the probate judge found the testimony of these witnesses to be incredible.  That, and a forensic expert witness who testified that the documents were forgeries, gave the judge all s/he needed. The documents offered by bad child were found to be invalid and bad child was sanctioned.

The sanction was for bad child to pay back all that had been distributed inappropriately under the forged documents, and to forfeit her share of the trust. It is this second sanction that introduces a curious legal question to what otherwise is just a colorful story.

The COA affirms the outcome, with the majority holding that a probate judge has the equitable power to disinherit a beneficiary simply because of egregious conduct. The dissent, accurately (to my thinking), points out that there is no such equitable power, and more importantly that there were at least two other legal remedies that would provide the same result. One option would be to simply invoke the terror clause (which the dissent believes is probably what the trial judge was thinking). The second option would be to impose double damage sanctions pursuant to MCL 700.7813(4).

In any event, if you’re going COVID crazy, this case makes for fun reading.

Click here to read the decision in In Re Geraldine Benjamin Trust.