A Little More Than Kin (another Sunday morning detour) 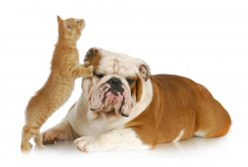 Hamlet said of his uncle who murdered his father and married his mother, that he is “a little more than kin, and less than kind.” In typical Shakespearian creativity, he captures the sense of something that is in between two things.

So it is today with pets. They are, in many cases, a little more than a thing we own, but a little less than another family member (although at times that is even a matter of debate).  In working with elders, one becomes particularly aware of the incredibly close bonds that can exist between person and pet.  For many elders, their pet is the last and most meaningful source of companionship and love.

Along the same lines, in the last decade, Michigan has joined the majority of states that allow people to set up trusts for their pets that survive them.  And it is certainly true in my practice that pet friendly charities are among the most common charities selected by people who leave portions of their estate to charity.

But the hot topic in pet law is: What happens when pets are injured by the bad acts or the negligence of others?

Certainly if your child is maimed or killed, there is the prospect of significant recovery through a civil lawsuit. And the damages you can recover can be based on the emotional pain you suffered by knowing or seeing your child hurt, and if they die, by the loss of their company.  But that is not the same for pets.  Rather pets are categorized as possessions.  So, from the legal perspective, the law would treat the death of a pet the same as the destruction of a car or couch.  The law makes you “whole” by giving you the money that it would take to replace that possession – and nothing for the emotional hardship you suffer as a result of the loss.

But there is a tension in the law. As discussed in this article (click here), and efforts are afoot to change the way pets are categorized.

While it may seem outrageous, to those who love their pets, that they cannot be compensated for the loss of, or injury to, their pet except to the extent of the replacement cost, one also has to consider what it would mean to change that rule – and where it would end. What about favored trees…. what about a family heirloom bracelet …if emotional damages can become recovered for the loss of anything that gets broken or destroyed, how will courts measure the harm?  Will everyone in a car accident claim they loved their car so much it hurts to see it injured?  While that may be an extreme, and while the law certainly could be modified to carve out an exception for domesticated animals without opening the door to other types of possessions, there are rational reasons that such damages are not currently available.

In today’s society, pets are something more – and something less. How this tension in the law is ultimately resolved should be interesting.